Now in its 7th year, the Institute of Travel Management’s (ITM) Buyer Achievement Awards recognise travel and meetings procurement techniques, as well as category expertise. The awards are in recognition of individuals and teams who have made a difference within their organisations. 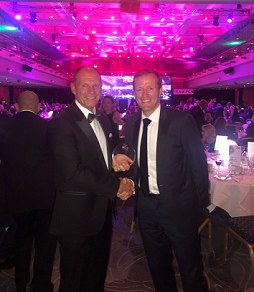 After collecting his award, Richard Childs said, “I’m delighted that the focus and effort that has gone into making the Biffa travel programme the success it is today has been recognised. My Inntel Account Manager has worked tirelessly with me on shaping and implementing the programme and I would like to extend my thanks to her.”

Douglas O’Neill, Inntel CEO said. “These prestigious awards are very well deserved. It’s a privilege to work with Richard and Cath, both of whom have a highly strategic but personable approach to procurement. I am proud of the strong, trusted and successful partnerships that Inntel have built with their organisations and on behalf of everyone at Inntel, I would like to congratulate them both.”

Cath Houlihan was not able to collect the award in person but acknowledged the hard work and joint effort of her colleagues, “It’s an absolute honour and privilege to have won this award. I accept it on behalf of the hard working teams at RICS and Inntel who have made this a phenomenal success story. This is not just recognition of one person’s efforts, this really has been a team effort and without the strong collaboration of my stakeholders, my team and Inntel, we could not have achieved such an amazing outcome.”