We experienced Jet Airways, flying business class on 3 of the 4 flights. We arrived in Goa at 0345 and reached the hotel at 0500 so it was an early start! At 1300 we met up with the supplier again for a minibus tour of the historical state then a prompt return to get changed and ready for dinner. We ate in a local restaurant and then taxi back to the hotel.

We started by visiting “Cidade de Goa”, the original name for the ‘city of Goa’ which was established in what is now called “Old Goa”. We then travelled to “Solar Souto Maior”, an aristocratic manor dating back to 1585 now carefully restored and renovated. It houses a treasure trove of artifacts.  We then returned to Panjim, the capital of Goa, driving through the city to see its colonial architecture and taking a leisurely walk through Fontainhas, whose distinct Iberian architecture displays the unique lifestyle.

So, what did you think of the city as a destination?

Goa was very traditional example of India. There were lots of cows wandering around the roads, a sacred animal in India worshipped as a god, as well as many historic buildings.

What initially caught your eye as you entered the venue? 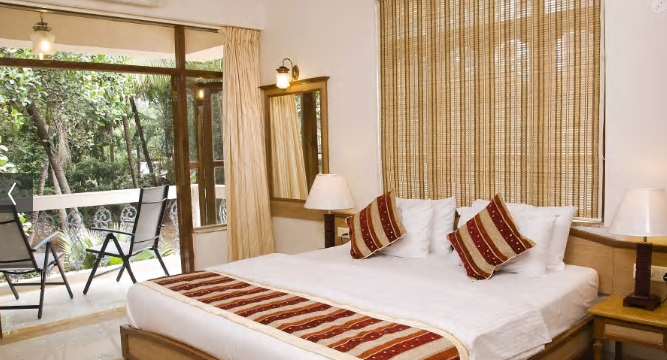 Ocean Palms Resort, was 45 minutes from the airport and wasn’t very well signposted from the road, we could have easily driven straight past it if our driver was unfamiliar with the hotel.

As we arrived so early in the morning, there were limited things to see until later on, however, the check in process was impressive-ly smooth. Hotel staff led us to our rooms and helped us to carry our luggage. All staff members were very polite and always stopped with a smile to say ‘Hello’ if we passed them throughout the hotel.

I was amazed by how big the bedroom was. My room over looked the pool and had two balconies, one in each corner, a real unexpected luxury! The room itself had a king size bed, two ceiling fans and an air con unit so my sleep was undisturbed by the Goan heat. The bathroom was big with a wet room shower so accessible too.

The extra facilities included a gym, spa and games area consisting of air hockey, library, TV and chairs. The hotel swimming pool was small but efficient for that time of the year in India as June – September is rainy season in India. I was a little disappointed to see there were no ATMs at the hotel, however, you could exchange money at reception.

What was the food and beverage offering at the venue like?

We had lunch and breakfast at the hotel. At breakfast, the selection of British food was limited but there were plenty of Indian food choices for those wanting to taste a bit of local culture as well as an egg station.
Lunch was much more suited to multinational palettes and the customer service from staff was very good.

Would you recommend the venue to business travellers and why/ not?

I wouldn’t recommend the Ocean Palm Resort itself as it wouldn’t be suitable for business trav-ellers, but other hotels like the Hyatt would be an ideal option to consider.

What would you say was the highlight of your trip?

The highlight was the city tour as we saw a lot of sights and experienced the way of life and culture surrounding Goa.

Any final comments/ opinions you think would be useful to a business traveller?

Try and stay in a well-known hotel as they will have better facilities. Restaurant facilities at your hotel are not essential as it is surprisingly cheap to eat out. 5 of us each had a 3 course meal and drinks for a total cost of around £10 per head.

Is business taking you to India?